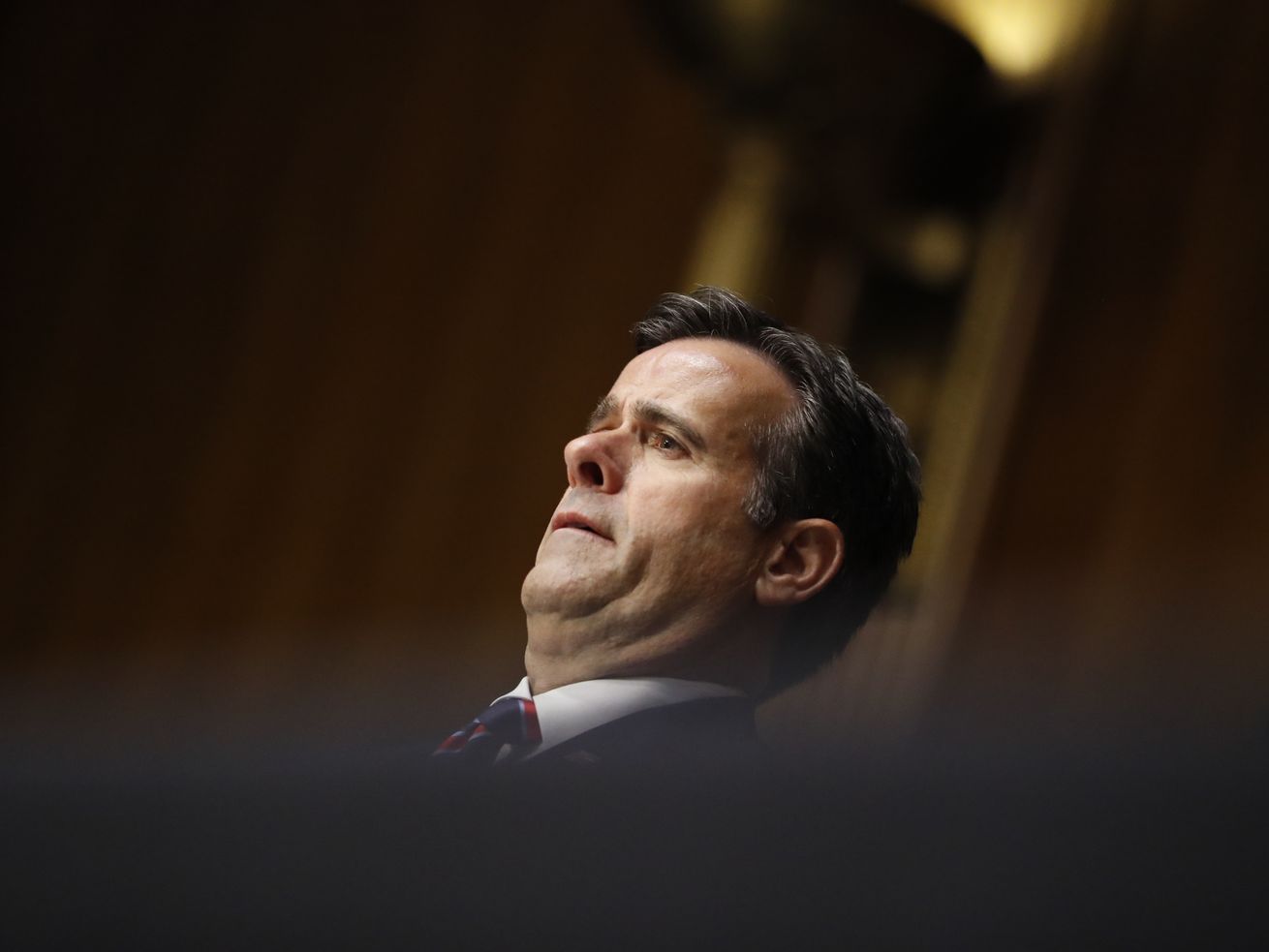 Congress will still get written updates, but the move will
curtail membersâ ability to ask questions.

The
Office of the Director of National Intelligence (ODNI) told
Congress that it would no longer deliver in-person election
security briefings,
a move thatâs angered lawmakers as Election Day
approaches.

The change could make it more difficult for members of Congress
to ask detailed questions about election security or press
officials on their findings, a worrisome proposition for oversight
in a year when foreign meddling
has already been confirmed.

Director of National Intelligence John Ratcliffe, a Trump
loyalist
confirmed to the position in May,
informed members of the House and Senate Friday of the change,
noting they
will continue to provide members with written updates.
Ratcliffe explained to congressional leaders that the move is to
prevent
âunauthorized disclosures,â a.k.a. leaks, of sensitive
information by members of Congress, which he suggested was taking
place. (He didnât explain why verbal briefings would be subject
to leaks but written briefings would not.)

âI believe this approach helps ensure, to the maximum extent
possible, that the information ODNI provides Congress in support of
your oversight responsibilities on elections security, foreign
malign influence, and election interference is not misunderstood
nor politicized,â
Ratcliffe wrote in a letter dated August 28. âIt will also
better protect our sources and methods and most sensitive
intelligence from additional unauthorized disclosures or
misuse.â

CNN, citing an ODNI official, reported that other intelligence
entities that play a role in election security, including the FBI
and Department of Homeland Security, will continue to brief
lawmakers.

But lawmakers directly pushed back against Ratcliffeâs
decision, with most of the criticism came from Democrats who called
the decision âoutrageous.â

âThe Office of the Director of National Intelligence has an
obligation to brief Congress on threats to our elections. Director
Ratcliffeâs outrageous decision to stop providing briefings to
Congress is an unprecedented attempt to politicize an issue â
protecting our democracy from foreign intervention â that should
be non-partisan,â Sen. Mark Warner (D-VA), vice chairman of the
Senate Select Committee on Intelligence, said in a statement.

Speaker of the House Nancy Pelosi (D-CA) and Rep. Adam Schiff
(D-CA), chair of the House Intelligence Committee, said in a joint
statement that the DNIâs decision is âa shocking abdication
of its lawful responsibility to keep the Congress currently
informed, and a betrayal of the publicâs right to know how
foreign powers are trying to subvert our democracy.â They added
that the ODNI had canceled an election briefing for lawmakers
scheduled in mid-September.

As for Republicans, Sen. Ron Johnson (R-WI) said the change was
being
âblown out of proportion.â Sen. Marco Rubio (R-FL), the
acting chair of the Senate Intelligence Committee also accused
member of Congress of leaking and politicizing information,

but said in a statement that that âdoes not release the
intelligence community from fulfilling its legal requirements to
respond to Congressional oversight committees and to keep members
of Congress fully informed of relevant information on a timely
basis.â

This change â with just two months until election day â
comes after the National Counterintelligence and Security Center
Director William Evanina
confirmed in August that foreign actors were attempting to
influence the 2020 election, calling out Russia, China, and Iran.
The ODNI acknowledged that
âRussia is using a range of measures to primarily denigrate
former Vice President Biden,â but said
China and Iran preferred Biden. Some Democrats had urged
intelligence officials to release more information publicly

so American voters could be on guard against election
interference.

Why limiting briefings before November 3 is a big deal

The ODNIâs decision to switch to mostly written briefings
likely means intelligence officials will get to more tightly
control what information is included in those reports. Itâs not
clear how thorough those briefings will be, and that may limit what
details Congress and the public know about election security weeks
before the election. Rep. Schiff has suggested that Congress could

subpoena the information, if necessary.

Evelyn Farkas, a former senior Pentagon official for Russia,
Ukraine, and Eurasia from 2012 to 2015, said that foreign and
domestic threats against free and fair elections are political
warfare. âWhen thereâs any kind of war, you get regular
in-person briefings from the administration,â she told me.
âWhy? Because itâs urgent, you need to be kept up to date as a
member of Congress, because you need to be able to make decisions
about funding, about whether the administration is doing a good
enough job as part of their oversight responsibilities.â

She added it also directly involves members of Congress â many
are running for reelection, after all â and the constituents who
could potentially be influenced. Sources and methods need to be
protected, but the more the public is aware of the real threats,
the better a safeguard for our elections.

And the ODNIâs decision to scale back briefings comes amid
larger questions about the potential politicization of intelligence
under the Trump administration.

President Donald Trump
has repeatedly rejected the intelligence communityâs
assessment that Russia interfered in the 2016 election with the
goal of boosting his candidacy, and he has
downplayed the Kremlinâs 2020 activities, contradicting his
own officials. A New York Times
investigation revealed that intelligence officials tweaked
assessments about Russiaâs aims in the 2020 election so as not to
upset the president.

Trump first tried to nominate Ratcliffe
for the intelligence job in July 2019, but Ratcliffe was
quickly forced to withdraw his nomination after
bipartisan pushback over his qualifications and because

he embellished his resume.

Joseph Maguire took over as the acting DNI, but Trump fired him
in February,
reportedly because he was furious over a briefing to Congress that
indicated Russia again preferred Trump. In his place, Trump
appointed
Ric Grenell, the then-US ambassador to Germany and another
Trump loyalist with no intelligence experience, to serve as the new
acting director. Then,
Trump nominated Ratcliffe again â and won.

Trump and his Republican allies have used the conclusions of
special counsel Robert Muellerâs investigation â which did not
find conspiracy between the Trump campaign and Russian actors but
confirmed Russian interference in the 2016 elections â to accuse
Democrats of overhyping the
âRussia hoax.â But
a bipartisan Senate investigation also found that Russia did
meddle to help Trump in 2016, and
their final report details that Russia most definitely made
overtures to the Trump campaign and found among their ranks people
who were receptive to foreign help.

By all accounts, Russia is at it again â and China and Iran,
too, are contemplating strategies to undermine the 2020 election.
Thatâs a national security threat to all Americans, but the
publicâs understanding of it is increasingly being shaped by
partisan divisions. Foreign actors, like Russia, have tried to
exploit these very divisions. And that ultimately makes it much
easier for those interference activities to succeed in undermining
American democracy.

Help keep Vox free for all

Millions turn to Vox each month to understand whatâs happening
in the news, from the coronavirus crisis to a racial reckoning to
what is, quite possibly, the most consequential presidential
election of our lifetimes. Our mission has never been more vital
than it is in this moment: to empower you through understanding.
But our distinctive brand of explanatory journalism takes resources
â particularly during a pandemic and an economic downturn. Even
when the economy and the news advertising market recovers, your
support will be a critical part of sustaining our
resource-intensive work, and helping everyone make sense of an
increasingly chaotic world. Contribute today
from as little as $3.